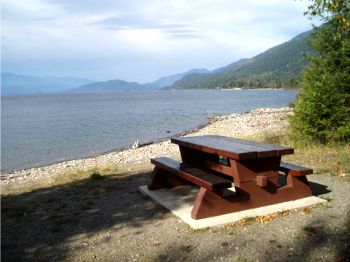 Located on the eastern shore of Kootenay Lake, at the mouth of Crawford Bay, 7 miles / 11 km south of the Kootenay Lake Ferry landing, is the historic village of Gray Creek, first settled in 1906. Sometimes identified as â€œIrontownâ€ on late 19th century maps after the mineral deposits in the area, it was also referred to as â€œGrey’s Creek,â€ possible after an early prospector. The spelling changed with the arrival of the first Post Office in 1908, when the settlement was officially named Gray Creek.

Stretching for approximately 6km along the shoreline and encompassing a wide mountain bench which attracted early orchardists and settlers, the community is home to Kootenay Lake’s oldest general store â€” the Gray Creek Store â€” located on Chainsaw Avenue. Touted as a â€œmetric free zone,â€ proprietor Tom Lymbery’s father started the business in 1913, and it has been a important service centre for the east shore since its inception. Between 1931 and 1947 The Gray Creek Store was also the location of the ferry terminal, and frequented by the sternwheelers which plied the lake waters in those early days. In addition to to a large selection of hardware and wood stoves, the store has a great collection of books on British Columbia history.

The Gray Creek Hall, a log structure on the lake adjacent to the creek, was built in 1911 and is still in regular use by the community.

In the late 1920’s the builders of Hwy 3A established a campsite at the southern end of the community at point known as â€œThe Lakeview,â€ which is the current site of the Gray Creek Post Office and sports a community grocery store, liquor agency, campground and gas bar.  You can still see an old wooden water wheel there at McFarland Creek, once used to produce electricity to power the camp.

Gray Creek is the western terminus of the Gray Creek Passforestry road to Kimberley. This 4×4 vehicle recommended scenic back road, accessible from either Anderson Rd. or Oliver Rd., offers opportunities for alpine hiking, wildlife viewing, creek fishing, huckleberry picking, picnicking and nature photography at numerous locations. Normally open July – October, stop in at the Gray Creek Store to check out the road’s current condition before you make the trip.

If you want to step back in time, enjoy history, need information about the Gray Creek Pass or the area in general, stop at Kootenay Lake’s oldest general store on Chainsaw Avenue; a prominent service center since 1913 for the East Shore offering a selection of Fireplaces, Wood Stoves, and Chainsaws. In addition to a … 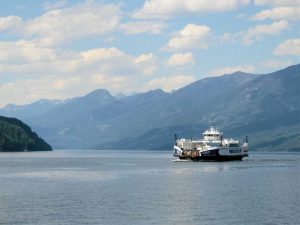 The Kootenay Lake Valley is a little-known treasure. Off the beaten tourist routes and relatively unscarred by clear-cut logging, its thickly forested mountains and pristine waters provide solace to the souls of residents and visitors alike. There’s plenty to do here including hiking, golfing, kayaking, etc–or just relax on a beach. You’ll find yourself surrounded …