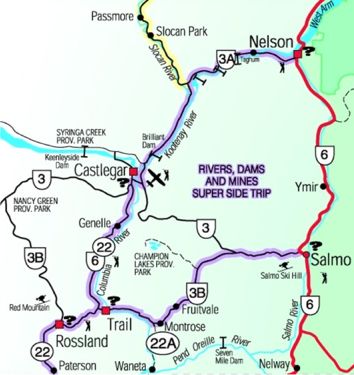 Water and recreation can be found at every turn on this Super Side Trip. The West Arm of Kootenay Lake turns south and converges with Lower Arrow Lake and joins the Columbia River all at Castlegar. There is a water park, an aquatic center, beaches, playgrounds and the best fishing and kayaking around. There is camping northwest of Castlegar on the eastern shores of the Lower Arrow Lake at Syringa Provincial Park which can be accessed on a paved road. Rocky Mountain Bighorn sheep, elk and mule deer are common to the area. You can also cycle 50 kilometers on the Kettle Valley Railway Bike Route that takes you all the way to Christina Lake on an easy railway grade, passing through 4 tunnels and over 3 trestles.

Stroll over the suspension bridge to Zukerberg Island Heritage Park for a self-guided tour or stop in at the recreated Doukhobor (say â€œduke-ho-boreâ€) Village situated on Hwy 3A just north of Castlegar, for a glimpse of the life of a pacifist sect from Russia as you tour the 10 buildings and learn about the fascinating history of the Doukhobor’s from the turn of the century in the Village Museum. Stop by the Station Museum, located downtown, to view one of the best preserved railway station museums in BC.

Trail is known as â€œBC’s Little Italyâ€ for its rich Italian heritage. The steeply terraced homes and bright gardens tucked along the winding streets of â€œlittle Italyâ€ have been delighting visitors from all over the world. The false front heritage buildings in the gulch, and the array of Italian Restaurants are evidence of the rich traditions of the Italian Immigrants who arrived here to build the railways in the 1900’s. Among the steeply terraced homes are long, interesting covered stairways, originally built uncovered prior to the 1920’s, provided for the miners to â€œwalkâ€ to work in the winter months, but now part of a downtown heritage walking tour. 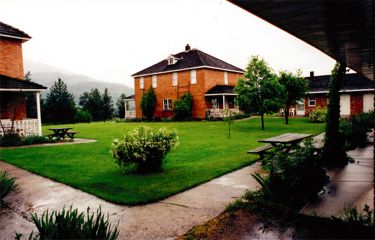 The world’s largest zinc and lead smelter producing 700,000 tones of concentrates each year, Teck Cominco, is located in Trail. If you have the time, visit the Teck Cominco Interpretive Centre and take a free tour 2 hour guided tour at 10 am Monday thru Friday. Take a break while downtown at the Aquatic Centre with its indoor pool, water slides, tennis and racquetball courts. Champion Lakes Provincial Park is east of Trail.

One of Canada’s highest cities, at 4,000 feet Rossland is enveloped in majestic mountain scenery. Learn about the legendary LeRoi Gold Mine that produced phenomenal amounts of gold in its time. Today view a short video of an underground trip of Canada’s only historic hard rock gold mine and learn why Rossland was dubbed “the Golden City”. Victorian architecture is still evident from a bygone era. Rossland is also known as the mountain biking capital of BC. There is 75 years of golfing tradition packed into the area with two championship courses on this route. There is a popular ski resort right at the outskirts of town if you are here in the winter.