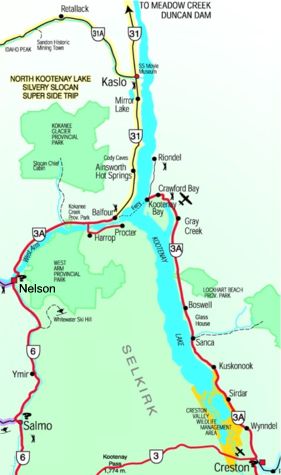 The communities, mountain lakes, rivers and parks that surround Kootenay Lake make up a remarkable area to visit. The Kootenay Lake Scenic Shoreline Drive make up the lake and steep mountainsides that have kept the area difficult to access and relatively undeveloped until the last century, preserving its pristine state – not even the Salish or Ktunaxa aborigonal peoples, who visited to fish and pick berries, made permanent settlements here. Sternwheelers plied its waters until the 1950’s, providing the main transportation to and from the communities along its shoreline. It wasn’t until the 1960’s that a paved road ran along its eastern shore, which now makes this spectacular region easily accessible. The mountainsides are heavily forested with towering trees, a testament to its Interior Rain Forest classification; as you drive north up the lake you will see the pine forests give way to fir, hemlock and cedar stands. The lake itself is a treasure; it is one of the largest bodies of fresh water in southern British Columbia, and is clean and clear enough to drink directly from as many households along the lake do.

Cruising in a boat is possibly the best way to enjoy Kootenay Lake, which stretches approximately 120 km (90 miles) from north to south. From this unique perspective on the water you will enjoy the broad vistas of the surrounding mountain ranges, quiet hidden coves, vast sandy beaches, vibrant lakeside towns and some of the best Dolly Varden and rainbow trout fishing in North America. Kootenay Lake is home to the Gerrard Rainbow Trout, fed on a diet of Kokanee Salmon, a landlocked sockeye, they are largest trout in the world with some specimens topping 35 pounds. Kootenay Lake has several marine parks along its unroaded western shoreline; Davis Creek/Lost Ledge, Drewy Point and Midge Creek/Campbell Bay Provinical Parks are accessible only by boat.

Boat aside, the drive along Highway 3A afords many beautiful views as it winds its way between Kootenay Lake and the towering mountains which contain it. The route takes you past quaint towns, Artisan workshops, galleries, beaches, golf courses, campgrounds and the “Glass House” – a house built entirely of bottles! On the hill between Crawford Bay and Kootenay Bay you can catch the best view of the Kokanee Glacier, a relic of the ice ages clinging to the 10,000′ mountains. Have your camera ready, its worth stopping for a picture. In Kootenay Bay you can catch the 35 minute free ferry ride across Kootenay Lake – the Longest Free Ferry in North America.

On the west shore you’ll find Balfour, the western terminus of the Kootenay Lake Ferry. The “North Kootenay Lake & Silvery Slocan Super Side Trip” takes you north through the mining heritage towns of Ainsworth Hot Springs and Kaslo, flanked by massive glaciated mountains and seemingly endless forests. The area is thick with Provincial Parks including Lockheart Beach Provincial Park north of Boswell. Steeped in a colourful history and fantastic natural beauty, Kootenay Lake is a recreational paradise.

A visit to this beautiful area is time well spent!